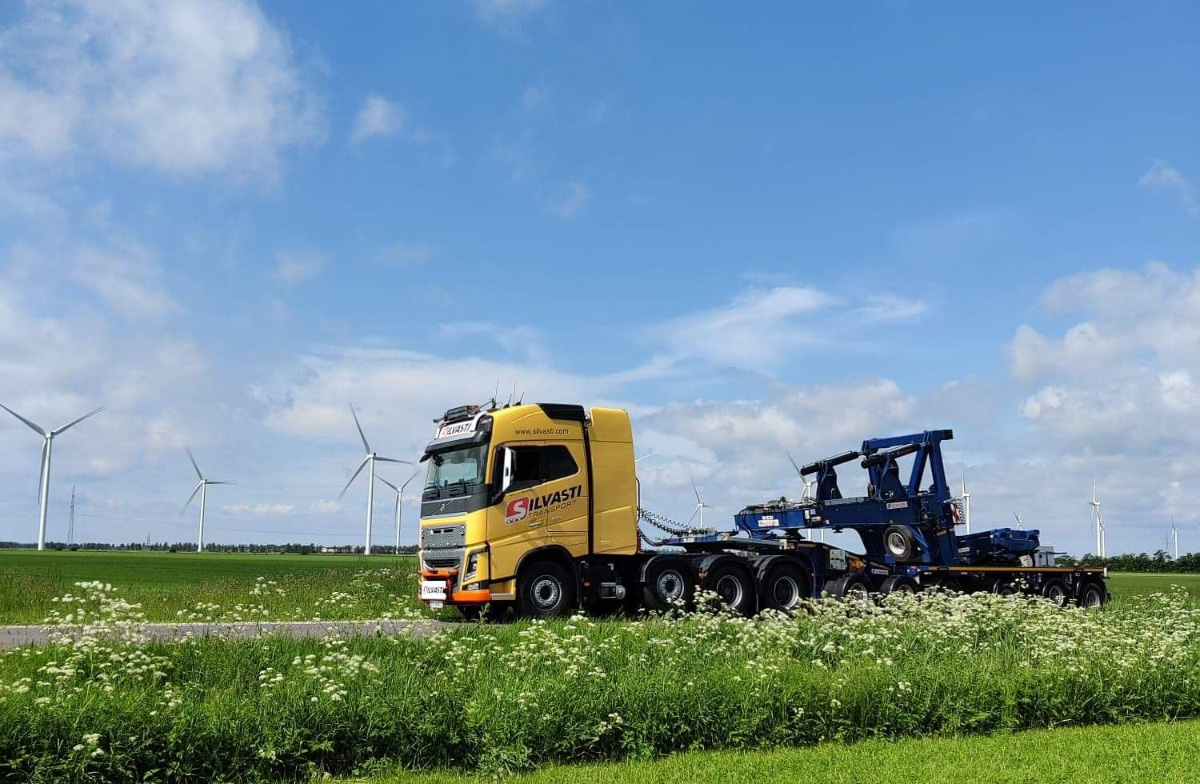 Wind power continues to grow strongly, as does the size of wind turbines. More than 80-metre blades will soon be commonplace. When that happens, Silvasti will be well prepared.

The average length of a wind turbine blade has more than doubled since the early 2000s. Hauling blades the length of a football field – over 80 metres – on narrow, winding roads is no simple matter. This is something Silvasti transport teams have experienced firsthand.

The problem has been recognized in the product development of heavy haul equipment. Significant progress has been made in recent years. In the last issue, we reported on Silvasti’s own innovations in tower block transports. Now there is a new groundbreaking technical solution in the market for blade transports as well.

”The new blade adapter consists of a separate front and rear dolly. The blade is not resting on a fixed trailer. The front end of the blade is bolted onto the front dolly, and the rear end is attached to a frame on an independent dolly. This dolly is remote-controlled rear dolly. In a way, the blade itself becomes part of the trailer, pulling the rear dolly behind it,” explains Lauri Riipinen, Silvasti CEO.

Blade dollies have currently been introduced into the market by a few companies. Silvasti’s supplier is Scheuerle Fahrzeugfabrik from Germany. In early April 2022, the Silvasti team visited the Vestas blade factory in Denmark for load testing of the new equipment. It was a success – even though there was a lot to learn about the new technology.

”First of all, loading is more technical and challenging than before. With the blade tail travelling more than 80 metres behind the truck on a separate rear dolly, the cooperation between the driver and the steering man has to be particularly seamless. Also, when it comes to route planning and removing road obstacles, the old rules don’t necessarily apply,” says Lauri.

The blade dolly is suited for all types and sizes of wind turbine blades. This includes the 100+ metre ones that will be introduced in the future. Transporting is safer than before. As the centre of gravity of the load can be precisely adjusted as the situation requires. There are three blades in a single wind turbine. That is why transports are always carried out in batches of three. Silvasti has initially purchased six blade dollies, enough for two sets of blades, and additional orders are being planned.

”We definitely want to stay at the forefront in our industry. We can handle even the most challenging wind power transports. Thanks to our new equipment we can reliably haul the longest blades the market presents us also in the future.” Lauri concludes.

The luckiest spotters may be able to see the new blade dollies in action in Sweden in 2022.